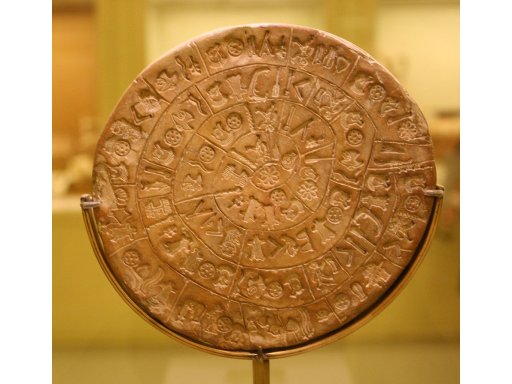 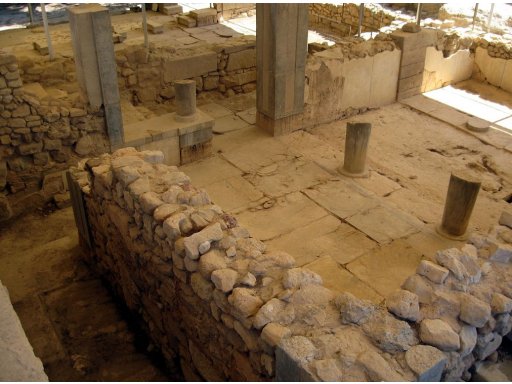 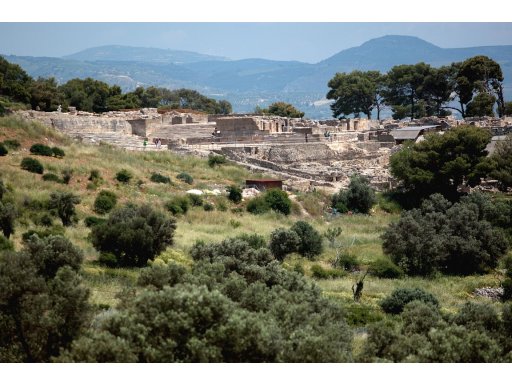 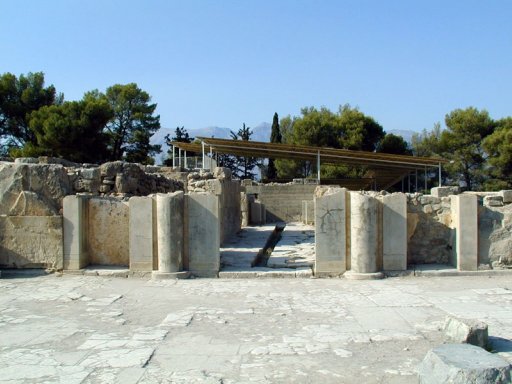 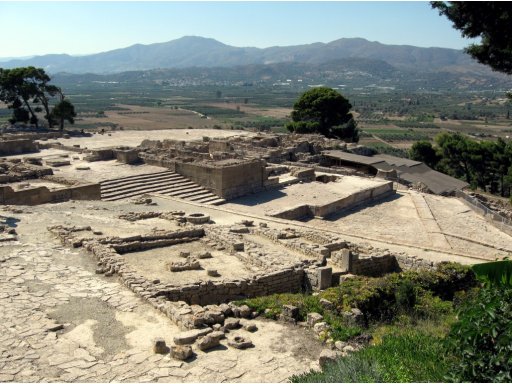 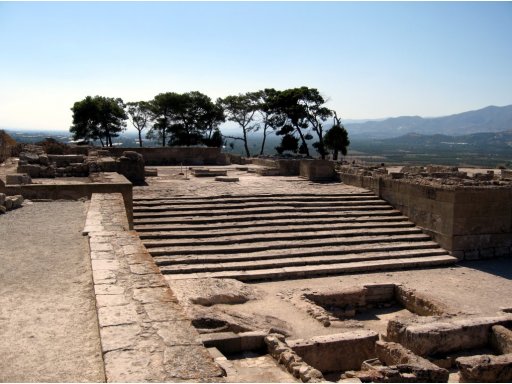 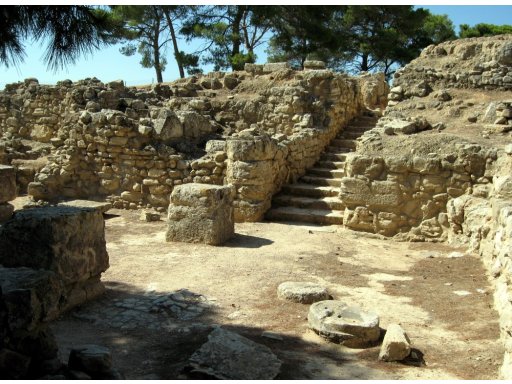 Phaistos (Greek: Φαιστός, pronounced [Fe'stos]; Ancient Greek: Φαιστός, pronounced [ Pʰai̮stós]), also transliterated as Phaestos, Festos and Latin Phaestus, currently refers to a Bronze Age archaeological site at modern Phaistos, a municipality in south central Crete. Ancient Phaistos was located about 5.6 km (3.5 mi) east of the Mediterranean Sea. The name, Phaistos, survives from ancient Greek references to a city in Crete of that name, shown to be, in fact, at or near the current ruins.

The name is substantiated by the coins of the classical city. They display motifs such as Europa sitting on a bull, Talos with wings, Heracles without beard and being crowned, or Zeus in a form of a naked youth sitting on a tree. On either the obverse or the reverse the name of the city, or its abbreviation, is inscribed, such as ΦΑΙΣ or ΦΑΙΣΤΙ, for Phaistos or Phaistios ("Phaistian" adjective) written either right-to-left or left-to-right.[3]These few dozen coins were acquired by collectors from uncontrolled contexts. They give no information on the location of Phaistos.

Phaistos was located by Thomas Abel Brimage Spratt, commander of the Spitfire, a paddle steamer, in the Mediterranean Survey of 1853, which surveyed the topography, settlements and monuments of Crete.[4]Spratt followed the directions of Strabo, who said:[5]

Of the three cities that were united under one metropolis by Minos, the third, which was Phaestus, was razed to the ground by the Gortynians; it is sixty stadia distant from Gortyn, twenty from the sea, and forty from the seaport Matalum; and the country is held by those who razed it.

The simple geometric problem posed by these distances from known points was solved with no difficulty by the survey. The location pinpointed was the eastern end of a hill, or ridge, rising from the middle of the Yeropotamos river valley extending from the sea to the Messara Plain in an east-west direction. The hill was called Kastri ("fort", "small castle"). A military man, Spratt understood the significance of the location immediately:[6]

I thus found that Phaestus had occupied the extremity of a ridge that divides the maritime plain of Debaki from the plain of the Messara, so as to command the narrow valley of communication....

A village of 16 houses remained on the ridge, but the vestiges of fortification walls indicated a city had once existed there. A half-century later, on removing the houses, Federico Halbherr and his crew began to discover the remains of an extensive palace complex. As he had begun excavation before Evans at Knossos in 1900, he did not have the advantage of Arthur Evans' concepts of Minoan civilization nor the knowledge acquired after the decipherment of the Linear B syllabary by Michael Ventris. Excavation ended in 1904, to begin again after another half-century, in 1950. By this time it was understood that the palace had been constructed at the beginning of the Proto-Palace Period, along with all the others. After 1955 the place name, pa-i-to, interpreted as Phaistos (written in Mycenaean Greek),[7] began to turn up in the Linear B tablets at Knossos, then under the Mycenaean Greeks. There was every reason to think that pa-i-to was located at Kastri.

No Linear B has been found at Phaistos, and yet tradition and the Knossos tablets suggest that Phaistos was a dependency of Knossos. Moreover, only a few pieces of Linear A have been found. As Phaistos appears to have been an administrative center, the lack of records is paradoxical. However, the lack of an expected event is not an argument for any conclusion. There are many possible reasons for the deficit. Records may yet be found.